I've very happy to have had the opportunity to attend and speak at PyCon Canada here in Toronto last week.

PyCon has always been a very well organized conference. There are a wide range of talks available, even on topics not directly related to Python. I've attended previous PyCon events in the past, but never the Canadian one!

My talk was titled How Mozilla uses Python to Build and Ship Firefox. The slides are available here if you're interested. I believe the sessions were recorded, but they're not yet available online. I was happy with the attendance at the session, and the questions during and after the talk. 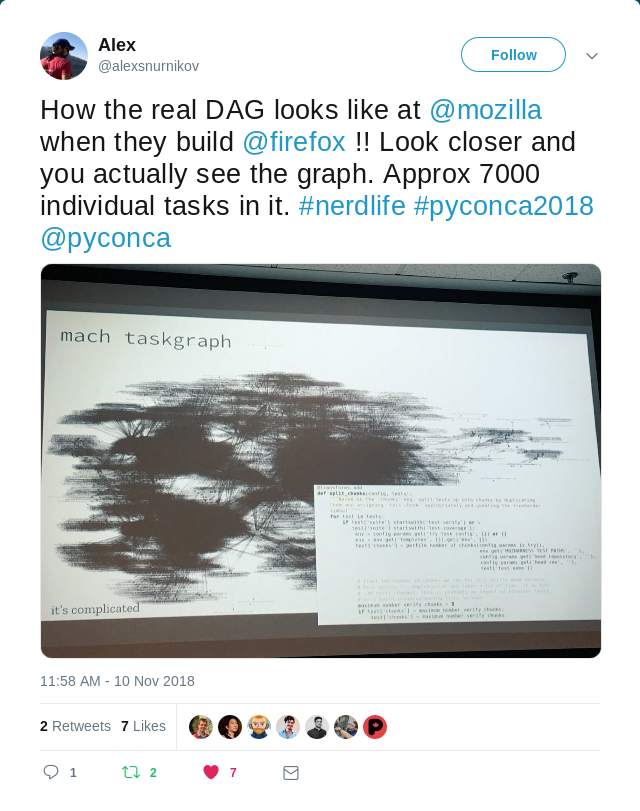 As part of the talk, I mentioned how Release Engineering is a very distributed team. Afterwards, many people had followup questions about how to work effectively with remote teams, which gave me a great opportunity to recommend John O'Duinn's new book, Distributed Teams.

Some other highlights from the conference:

I had the opportunity to spend last week in Portland for PyCon 2016. I'd like to share some of my thoughts and some pointers to good talks I was able to attend. The full schedule can be found here and all the videos are here.

Brandon Rhodes' Welcome to PyCon was one of the best introductions to a conference I've ever seen. Unfortunately I can't find a link to a recording... What I liked about it was that he made everyone feel very welcome to PyCon and to Portland. He explained some of the simple (but important!) practical details like where to find the conference rooms, how to take transit, etc. He noted that for the first time, they have live transcriptions of the talks being done and put up on screens beside the speaker slides for the hearing impaired.

He also emphasized the importance of keeping questions short during Q&A after the regular sessions. "Please form your question in the form of a question." I've been to way too many Q&A sessions where the person asking the question took the opportunity to go off on a long, unrelated tangent. For the most part, this advice was followed at PyCon: I didn't see very many long winded questions or statements during Q&A sessions.

Ned Batchelder gave this great talk about using python's language features to debug problematic code. He ran through several examples of tricky problems that could come up, and how to use things like monkey patching and the debug trace hook to find out where the problem is. One piece of advice I liked was when he said that it doesn't matter how ugly the code is, since it's only going to last 10 minutes. The point is the get the information you need out of the system the easiest way possible, and then you can undo your changes.

I found this session pretty interesting. We certainly have lots of code that needs refactoring!

I found this interesting, but a little too theoretical. Object capabilities are a completely orthogonal way to access control lists as a way model security and permissions. It was hard for me to see how we could apply this to the systems we're building.

A really cool intro to the Home Assistant project, which integrates all kinds of IoT type things in your home. E.g. Nest, Sonos, IFTTT, OpenWrt, light bulbs, switches, automatic sprinkler systems. I'm definitely going to give this a try once I free up my raspberry pi.

A very entertaining session about closures in Python. Does Python even have closures? (yes!)

Life cycle of a Python class

Lots of good information about how classes work in Python, including some details about meta-classes. I think I understand meta-classes better after having attended this session. I still don't get descriptors though!

(I hope Mike learns soon that __new__ is pronounced "dunder new" and not "under under new"!)

Very good presentation about getting started with deep learning. There are lots of great libraries and pre-trained neural networks out there to get started with!

I really enjoyed this talk. Cory Benfield describes the importance of keeping a clean separation between your protocol parsing code, and your IO. It not only makes things more testable, but makes code more reusable. Nearly every HTTP library in the Python ecosystem needs to re-implement its own HTTP parsing code, since all the existing code is tightly coupled to the network IO calls.

Some interesting notes in here about the history of Python, and a look at what's coming in 3.6.

An intro to the click module for creating beautiful command line interfaces.

A good introduction to what HTTP/2 can do, and why it's such an improvement over HTTP/1.x.

Really good talk about failing gracefully. He covered some familiar topics like adding timeouts and retries to things that can fail, but also introduced to me the concept of circuit breakers. The idea with a circuit breaker is to prevent talking to services you know are down. For example, if you have failed to get a response from service X the past 5 times due to timeouts or errors, then open the circuit breaker for a set amount of time. Future calls to service X from your application will be intercepted, and will fail early. This can avoid hammering a service while it's in an error state, and works well in combination with timeouts and retries of course.

I was thinking quite a bit about Ben's redo module during this talk. It's a great module for handling retries!

Diving into the wreck

A look into diagnosing performance problems in applications. Some neat tools and techniques introduced here, but I felt he blamed the DB a little too much :)

I didn't end up going to this talk, but I did have a chance to chat with Brian before. magic-wormhole is a tool to safely transfer files from one computer to another. Think scp, but without needing ssh keys set up already, or direct network flows. Very neat tool!

How to do planetary orbit simulations in Python. Pretty interesting talk, he introduced me to Feynman, and some of the important characteristics of the simulation methods introduced.

Hilarious talk about building bots with Python. Definitely worth watching, although unfortunately it's only a partial recording.

The infamous GIL is gone! And your Python programs only run 25x slower!

Larry describes why the GIL was introduced, what it does, and what's involved with removing it. He's actually got a fork of Python with the GIL removed, but performance suffers quite a bit when run without the GIL.

If you watch only one video from PyCon, watch this. It's just incredible.